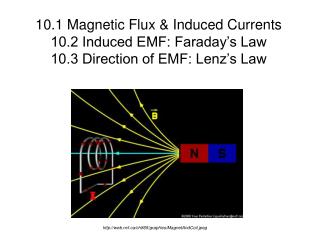 Electromagnetic Induction - . induced current: loop of wire -moved in a magnetic field a voltage is induced in the wire.

General form of Faraday’s Law - . so the electromotive force around a closed path is:. and faraday’s law becomes:. a

Lenz’s Law - . examples using lenz’s law. lenz’s law the induced emf and induced current are in such a direction as