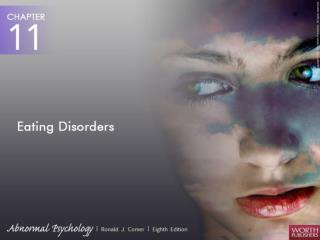 Eating Disorders. It has not always done so, but Western society today equates thinness with health and beauty Thinness has become a national obsession There has been a rise in eating disorders in the past three decades The core issue is a morbid fear of weight gain Two main diagnoses:.

Eating Disorders - . by: kaitlin gray multi-genre project engl 101 - 050. what are they?. an illness that involves

Eating Disorders - . what to look for and how to help. physical signs. low weight considerable weight loss extreme weight

Eating Disorders - Statistics. the average model weighs 23% less than the average women.maintaining a weight that is 15%

Eating Disorders - . people with bulimia consume large amounts of food and then rid their bodies of the excess calories