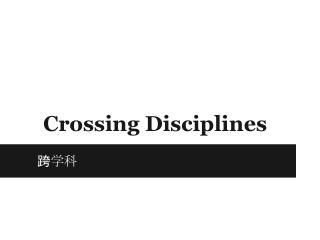 Crossing Disciplines. 跨 学科. Big Question. How could (or should?) the kinds of processes we have observed help us to address the differences between home and elsewhere across borders, languages and disciplines in the early twenty-first century?. Topic. Welcome to Finland! - . finland, officially the republic of finland, is a nordic country situated in northern europe.

The Ethics of Caring - . march 19, 2014 linda mcclain lcsw. objectives. upon completing this workshop, learners will: