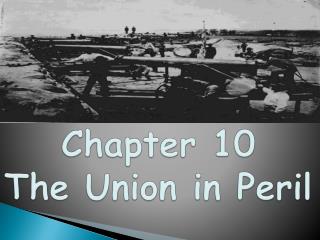 Chapter 10 The Union in Peril Chapter 10 The Union in Peril

The Southern Colonies: Agriculture and Slavery

The Union in Crisis Chapter 10 - . how did the nation’s expansion lead to the civil war?. slavery, states’ rights,

Slavery - . in your own words define slavery. slavery is…. a system under which people are treated as property and

Free State - a state in which slavery was illegal. Northern states were free states. - Vocabulary cards write word and

Lesson 14.4b: The Southern Defense of Slavery - . today we will discuss the south’s defense of slavery against the

Ch.10 - . the union in peril. bell ringer. what major issues have we discussed so far this semester? why do you think

THE UNION IN PERIL: CAUSES OF THE CIVIL WAR CHAPTER 10 - . section 3 birth of the republican party why were new political

THE UNION IN PERIL: CAUSES OF THE CIVIL WAR CHAPTER 15 - . section 4 birth of the republican party why were new political

Chapter 10 “And Black People Were at the Heart of It”; The United States Disunites over Slavery - . i. free labor ~