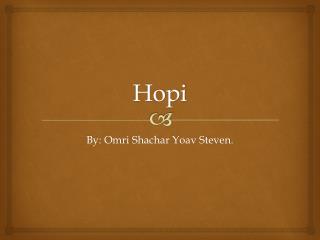 Hopi. By: Omri Shachar Yoav Steven. . The Hopi lived in Northern Arizona. A R I Z O N A. Lifestyle. *The Hopi ate and grew beans melons squash and corn. *They found use for every source of water. *Women wore a un dyed cotton robe with an embroidered belt and the Hopi - . of the southwest. ss4h1 the student will describe how early native american cultures developed in north