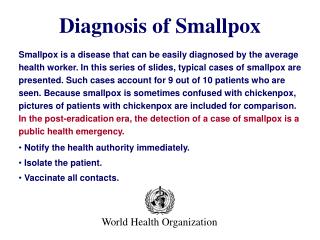 Preparing for and Responding to Bioterrorism: Information for Primary Care Clinicians - . acknowledgements. this

SMALLPOX - . presentation by: maria s avila-perez. history of the smallpox. one of the deadliest diseases. this disease

Smallpox - . variola virus. ecology. first appeared in northeastern africa around 10,000 bc. first named in england at

SMALLPOX - . by meghan burrage. what is smallpox?. a serious contagious disease due to a virus once worldwide, causing

Smallpox - . aditya harsh. what is smallpox?. smallpox is a very deadly disease caused by a virus called the variola

SMALLPOX - . by: makayla claiborne and amber howard. what is smallpox?. smallpox also called variola is defined as an

Smallpox - . by joel gustafson &amp; brian vikan. timeline of smallpox. 300 b.c. the chinese use inoculation to

Overview of Smallpox 2002 - . smallpox as a bioterrorism agent. last reported case in minnesota in 1947 eradicated in

SMALLPOX - . katherine stevens year 10 science mr. kearney. what is the disease?. there are two types of smallpox,