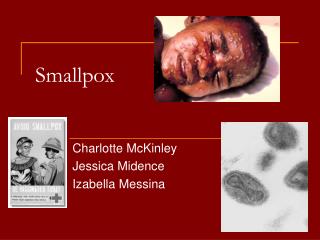 Smallpox. Charlotte McKinley Jessica Midence Izabella Messina. Smallpox. Smallpox is a serious, contagious and sometimes fatal disease. There is no specific treatment for smallpox, and the only prevention is vaccination.

SMALLPOX - . terrorism &amp; science what do we know what should we do values, choice, public health and public

Smallpox - . by abigail renteria , adam roberts , tracy jenner , jenna whalen. what is smallpox. smallpox is an

Smallpox - . by joel gustafson &amp; brian vikan. timeline of smallpox. 300 b.c. the chinese use inoculation to

Smallpox - . variola virus. ecology. first appeared in northeastern africa around 10,000 bc. first named in england at

Smallpox - . by braden johnson and kaleb decker. transmission. smallpox spreads easily from one person to another from

SMALLPOX - . by: makayla claiborne and amber howard. what is smallpox?. smallpox also called variola is defined as an

SMALLPOX - . presentation by: maria s avila-perez. history of the smallpox. one of the deadliest diseases. this disease

SMALLPOX - . katherine stevens year 10 science mr. kearney. what is the disease?. there are two types of smallpox,

Smallpox - . by: amanda seiler. transmission. smallpox is spread from one person to another through close face-to-face

Smallpox - . aditya harsh. what is smallpox?. smallpox is a very deadly disease caused by a virus called the variola