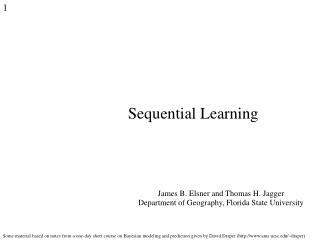 Sequential Learning . James B. Elsner and Thomas H. Jagger Department of Geography, Florida State University. Some material based on notes from a one-day short course on Bayesian modeling and prediction given by David Draper (http://www.ams.ucsc.edu/~draper).

Lecture 4A - . repetition. richard gesick. overview. iteration 3 kinds of loops for while do while infinite loops.

Chapter 7 Sorting - . instructors: c. y. tang and j. s. roger jang. all the material are integrated from the textbook

Combinational and Sequential Circuits - . up to now we have discussed combinational circuits. in many cases, one can