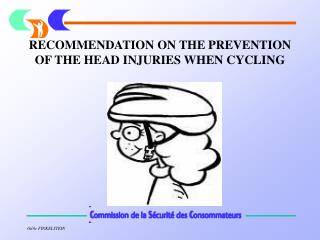 RECOMMENDATION ON THE PREVENTION OF THE HEAD INJURIES WHEN CYCLING

RECOMMENDATION ON THE PREVENTION OF THE HEAD INJURIES WHEN CYCLING. THE STUDY OF THE COMMISSION. 1.         What is the part of head injuries among all the injuries suffered by accidented cyclists ?

RECOMMENDATION ON THE PREVENTION OF THE HEAD INJURIES WHEN CYCLING

Lifetime Fitness: Ch 3- Exercising Safely - . pe hs 1.3 injuries: the learner will be able to describe the prevention and

Concussions - . by: steve korsan and kele mangus. what is a concussion?. concussions are brain injuries. they are caused

Head Face &amp; Brain Injuries - . head injures. head injury-damage to the scalp, skull or brain due to a blow two

Cycling Injury Prevention - . what you can do now to prevent injuries, and increase cycling performance jeff stripling

History, Discussion and Recommendation to SBOE - . college and career readiness. kansas needs 64% of workers to have a