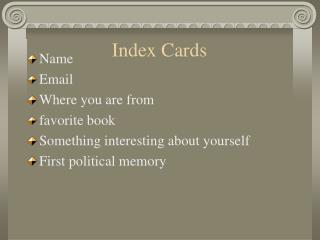 Index Cards . Name Email Where you are from favorite book Something interesting about yourself First political memory. Format of Class. Lecture outline on-line Not the University of Wisconsin The Socratic method, aka random terror Attendance Policy– 2 absences

Index cards - . write your full name on it e-mail address major current job and/or career goal something you want me know

Calculus Index Cards - . front and back. instructions. the odd numbered slides are the front of the index card, the

Index - . how to create an inspection request? how to login in the pele-marine app? how to fill the report? how to use