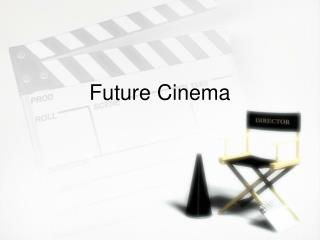 Enter the cinema of the future… - . digital technologies for the cinema industry. oddo midcap forum 2014 – lyon –

Cinema - . creating a masterpiece. where does film begin?. 1895 – kinetoscope developed by edison free oneself from

Cinema - . cinema is aesthetic communication through the design of time and three-dimensional space compressed into a