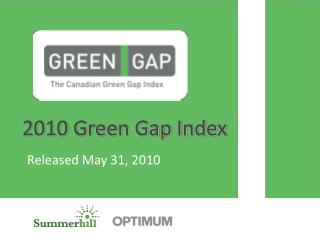 2010 Green Gap Index Released May 31, 2010 Introduction CANADIAN GREEN GAP INDEX The main objective of this study is to understand the “gap” between Canadians’ environmental actions and their perceptions of being environmentally conscious.

Review of Green Building Index GBI in Malaysia - In recent years, global warming has been a major issue in every country