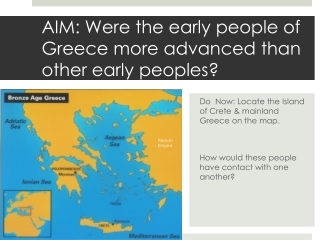 AIM: Were the early people of Greece more advanced than other early peoples?. Do Now: Locate the Island of Crete & mainland Greece on the map. How would these people have contact with one another?. Persian Empire. Roots of Greek Civilization. Minoan Culture – 3,000 B.C. Island of Crete.