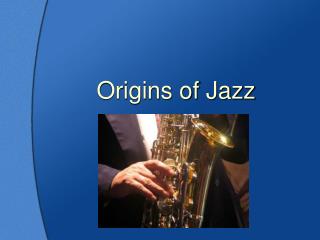 Origins of Jazz Intro to Jazz Jazz is a strictly American style of music Created by musicians who were predominantly African American Created for performing in the streets, bars, brothels, and dance halls in New Orleans other Southern cites What is Jazz? Jazz is characterized by:

Jazz and Blues Music - . in the beginning and today. what is jazz?. jazz is free!. in jazz music the structure is less

History of Jazz - . development of the only truly american music. african heritage. jazz came from an integration of

Jazz - . jazz is a musical style that originated at the beginning of the 20th century in black communities in the

Jazz Dance History - . ghs dance department dance 1. origins of jazz dance. “jazz” is a word that came into the

The Jazz Age 1921-1929 - . a clash of values. nativism resurges as immigration picked up after world war i many

JAZZ. THE AMERICAN ARTFORM THE ORIGINS OF JAZZ - . ‘whose music is it anyway?’ and other stupid questions. approaches

Brief History of Jazz &amp; Musical Theatre Dance - . by wendy oliver adapted by sara macinnes for use with dance 11

The History of Jazz Music in New Orleans - History of jazz music. jazz music was born around 1895 in new orleansit was a