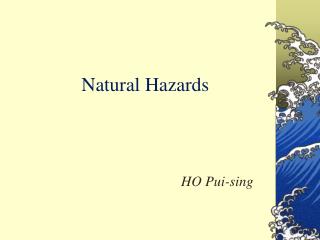 NATURAL HAZARDS &amp; DISASTERS - . what are hazards? a hazard is any event that could threaten or pose injury to

Natural Hazards - . what are the greatest risks? are these risks increasing? what are the costs associated with

Natural Hazards - . what is an earthquake?. ground movement caused by the sudden release of seismic energy due to

Impact of Natural Hazards in Some Key Cities in the Philippines - . session 1. safe cities module 2: philippines

NATURAL HAZARDS - . what is it?. the photo above is a satellite image of a hurricane. a hurricane is one of the most

Natural Hazards What I Learned &amp; What You Should know - . briauna haycock geography 1700 april 2012. natural

How Natural Disasters Impact the Environment - . can you name some natural disasters?. earthquakes hurricanes lightning