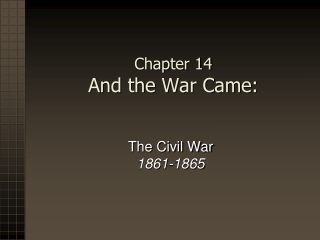 American Civil War (1861 – 1865) - . themes . compare and contrast north and south highlight some of the important

The Major Battles of the Civil War - . vs. battle of fort sumter. fort sumter - april 12 1861. located near charleston,

The Major Battles of the Civil War Part II - . moi. learning objectives. comprehend and compare the battles at antietam,

Major Battles and Events of the Civil War - . sol usi 9e: the student will demonstrate knowledge of the causes, major