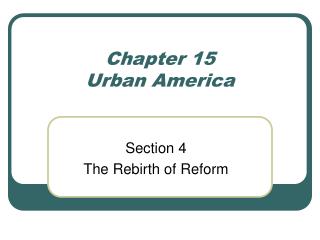 CHAPTER 14 IMMIGRATION AND URBANIZATION - . how did american urban life change between 1875 and 1914?. standards. ssush

Urbanization and The American City - . reasons for the american city the immigrants the american family changed by

Chapter 7: Immigrants and Urbanization - . section 1: the new immigrants. immigrants sought change…. some of these

IMMIGRATION - . process of moving from one country to another permanently. immigration to the u.s. started after the

Urbanization - . urbanization. definition growth and diffusion of city landscapes and urban lifestyle can be difficult to

Politics, Immigration, And Urban Life 1870-1915 - . chapter 15. the gilded age suggests that there was a glittering layer

Chapter 6: Urban America - . european and asian immigrants arrived in the united states in great numbers during the late