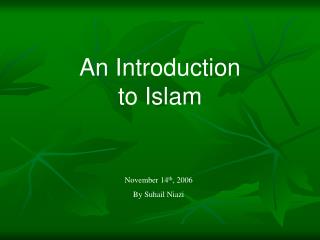 An Introduction to Islam

An Introduction to Islam November 14 th , 2006 By Suhail Niazi Table of contents 1. Who am I? 2. Five pillars of Islam 3. Basic beliefs 4. Who is Allah? 5. Who is Muhammad? 6. What is the Quran and Sunnah? 7. Islam and other religions 8. Islamic dress 9. What is forbidden in Islam

An Introduction to Islam

THE RELIGION OF ISLAM - . special series: the spread of islam the afterlife the koran (encourager of peace or violence?)

Introducing Islam - . in the name of god; the most merciful the most compassionate. islam. the arabic meaning of islam is

Salam ! - . number your paper #1-8. write down the first word or phrase that comes to your mind for each picture. there

Islam - . who is muhammad and what do he represent in islam?. last and greatest of the prophets. list the five pillars of

Islam is peace, Islam is ease, Islam's not danger or disease. Islam is love and prosperity. Islam's not hatred or - Ity.

Islam - . introduction ‘there is no god but god’. key terms and persons. islam- submission, surrender to god muhammad

Introduction to Islam - . by : faiza mubin alvi. contents. islam and muslims : the terms some fundamental concepts of