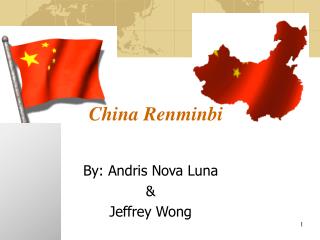 China Renminbi. By: Andris Nova Luna & Jeffrey Wong . Reminbi. ¥. People’s Currency. A variety of currencies circulated in China during the Republic of China era, most of which were denominated in the unit "Yuan".

Fang Ji June 15, 2004 - The comparison of financial institutions, markets &amp; instruments in china &amp; us and