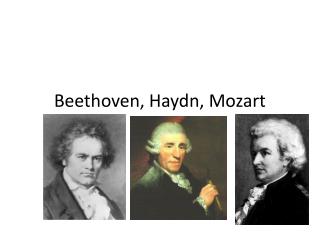 THE AMAZING Ludwig van beethoven - . fun facts about beethoven!. although beethoven had love relationships, no one stands

Ludwig van Beethoven - . today i’m going to tell you about ludwig van beethoven – the greatest composer of the end of

II. The Composer, Patron, and Public in the Classical Period - . journal entry what do you think of when you think