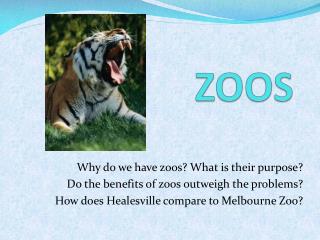 ZOOS. Why do we have zoos? What is their purpose? Do the benefits of zoos outweigh the problems? How does Healesville compare to Melbourne Zoo?. What is a zoo?. Definition: Zoos - . animals in society g. robert weedon, dvm, mph. “in the end we will conserve only what we love, we will love

ZOOS - . by: leah kasheta. what is a zoo?. place where animals are put in captivity and on display for the public.

Zoos Are Bad! - By : charlie tran. zoos are bad!. animals get abused ! some animals can get abused by being beaten and

Zoos Good or Bad? - . by: emile, alice, presley. pros. they always have food. they are safe. the panda was born in a zoo.

Zoos Are Harmful to Animals - . living in zoos can drive animals crazy…. some signs of craziness are when elephants

Animal Displays or Petting Zoos - . guidelines for animal contact areas. instruct the public to wash their hands before

Zoos Are Harmful Too animals - . animals need the wild . we have freedom. why don’t we give freedom to animals?. do

Should animals be kept in zoos? What are the pros and cons about zoos? - . contents page . pros about zoos cons about

Lack of substrate use in zoos - . hilda tresz behavioral manager phoenix zoo icee 2011. the number of zoos and other

Good and Bad Things About Zoos - . by:joshua,logan,rachel. good things about zoos. they always have food they keep