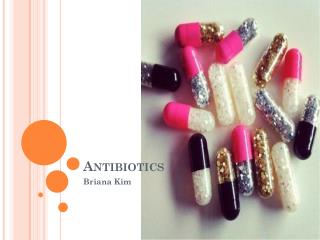 Antibiotics. Briana Kim. Defining Antibiotics. Antibiotics, also known as antibacterials , are types of medications that destroy or slow down the growth of bacteria. The Greek word anti means “against”, and the Greek word bios means “life” (bacteria are life forms).

Hmm... I feel sick, do I need antibiotics? - . children, infections and antibiotics. an interactive parental educational

ANTIBIOTICS - . the h itmen of the bacterial world. they slow down &amp; kill bacteria. the first antibiotic made was

Vaccines vs. antibiotics - . 1..vaccine is taken once and has permanet effect whereas antibiotics work during the time of

Chapter 20: Antimicrobial Drugs - . what are antibiotics?. definition: chemicals produced by one microorganism to kill or

ANTIBIOTICS - Introduction. antibiotics are among the most frequently prescribed medications in modern medicine.