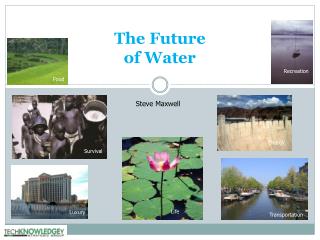 The Future of Water The Future of Water. Recreation. Food. Steve Maxwell. Energy. Survival. Life. Luxury. Transportation. What Makes Water Unique?. We all tend to take water for granted .…. but: It is our most essential life-sustaining substance It is the most critical input to the world’s economy

The Future of Water Who on earth cares about water ? - . j. feyen faculty of agricultural and applied biological sciences department of land

Water for the Future … - . fresh, safe, &amp; clean. manufactured by the safestar products company. the obvious

How wasting water can effect our future - . by: ana . what is wasting water?. we can waste water by … taking a bath

Water Demand Management in the City of the Future - . water supply and sustainable urban water management. the urban

Water - . a report showing the current consumption rates of water in melbourne, strategies used to save water and

Designing the Future for the St. Louis Water Division and the City - . the vision…. “but we as water works men cannot

Texas Groundwater Resources Are Critical to Meeting Our Future Water Needs - . overview. introduction why are we