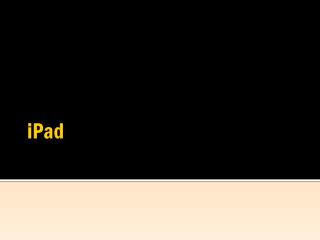 iPad - . what is it? the ipad is a tablet computer designed and marketed by apple company for internet browsing, media

iPad - Apple is a leading brand which manufactures highly functional gadgets which are made up of advanced technology.

iPad - . what is an ipad ? . an ipad is like an a portatil computer , the functions of the ipad are similar of the

Ipad - . what is an ipad?. an ipad is a table computer, or a touch screen that has almost the same functions as a regular

ipad parts | ipad parts Canada |ipad parts Toronto - If you are looking for one stop over for accessories for ipad, ipad