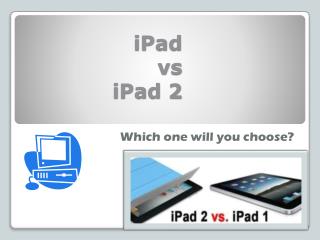 how to use iPAd & iPad 2 - This book is the best available resource currently online, and you can have it now! visit:

Apple Ipad 2 vs. Lenovo Thinkpad Tablet - . by: megan rall. applications in the classroom. thinkpad quickoffice: can be

iPad - . what is it? the ipad is a tablet computer designed and marketed by apple company for internet browsing, media