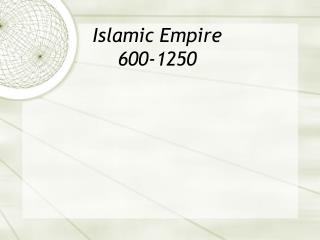 Islamic Empire 600-1250. Map of Islamic Empire. Geography: Why is it important?. Spread to 3 continents: Africa, Europe and Asia Creation of Baghdad as major city 762. The Battle of Tours (732). Muslims stopped by Frankish Empire (decedents of Charlemagne.

Muslim Empire and Coexistence - . arabic invasion. 711 tarik crosses the strait of gibraltar. summary of periods of

The Muslim World 600-1250 - . islam shapes every aspect of a muslim’s life - law is not separate from religion. islam

Chapter 10: Muslim Civilizations 622 – 1629 - . chapter focus: who was muhammad and how did his teachings lead to the

NEXT - The muslim world, 600 – 1250. tolerance of other cultures and a focus on learning help muslim leaders build an

Medieval Islamic Society - . between 600-1250 islam develops into a major religion spanning 3 continents and an empire

CHAPTER 10 THE MUSLIM WORLD, 600-1250 - . tolerance of other cultures and a focus on learning help muslim leaders build

Chapter 2: The Muslim World Expands - . the ottoman empire expands. by 1300 the byzantine empire was in decline and the

Aim: How did Islam Influence life in West Africa? Do Now: Review of Islam Answer the following questions: What are the