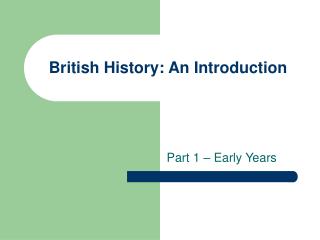 British History: An Introduction. Part 1 – Early Years. Why is History Important?. History can give meaning and context to culture: The origins of traditions, languages, art, geography etc are all related to history. E.g. Why is Mandarin the official language of Taiwan? The British Constitutional System - . introduction. early history qualifying the power of the monarchy path to

A History of Reserves in British Columbia - . the royal proclamation of 1763. issued by king george iii (britain) after

British Romanticism - . introduction to the social/cultural contexts. influences behind british romanticism. the age of

A Brief History of British Common Law - . the magna carta: fundamental rights and liberties from 1225. signed in 1225

Theatre History - . theatre around the world. british theatre. the theatre of the british isles entered the modern age

Offshore Hydrocarbon Development in British Columbia: A Brief History of the Moratoria - . by rod dobell for maritime