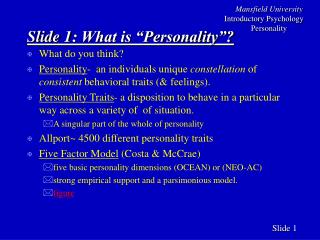 Slide 1 : What is “Personality”?. What do you think? Personality - an individuals unique constellation of consistent behavioral traits (& feelings). Personality Traits - a disposition to behave in a particular way across a variety of of situation. Personality - . what makes you who you are?. warm up . on a ½ sheet of paper- write a list of words/characteristics that