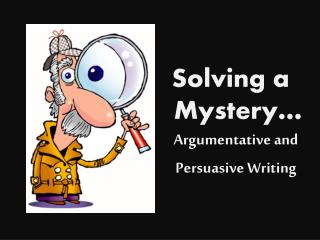 Solving a Mystery…. Argumentative and Persuasive Writing. Argumentative. Argument, is mainly about logical appeals and involves claims, evidence, warrants, backing, and rebuttals. Argument is at the heart of critical thinking and academic discourse.

PROBLEM SOLVING &amp; DECISION MAKING - . learning objectives. at the end of the training, participants are expected

PROBLEM SOLVING AND DECISION MAKING - . ice breaker. icebreaker. what is your leisure activity? who , living or dead , do

Solving One-Step Equations - . lesson 2 – 1 . addition and subtraction properties of equality a, b, and c are real

Redemption through the Paschal Mystery - . unit 6. the redemptive love and suffering of