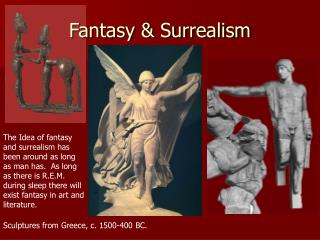 Fantasy & Surrealism. The Idea of fantasy and surrealism has been around as long as man has. As long as there is R.E.M. during sleep there will exist fantasy in art and literature. Sculptures from Greece, c. 1500-400 BC. The full circle.

SURREALISM, FREUD AND THE WORLD OF DREAMS - . by deano andrico. surrealism the practice of producing fantastic imagery or

Where Surrealism - . meets the absurd. the

Realms of Fantasy - . by john m. busch. fantasy. unlike science fiction, fantasy deals with that which is not possible.