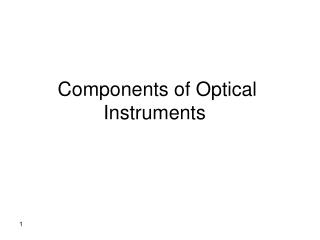 Components of Optical Instruments . Spectroscopic methods are based on either: 1. Absorption 2. Emission 3. Scattering Spectroscopic instruments dependent on any of the above mechanisms encompass common components which can be listed as:. 1. A stable source of radiation