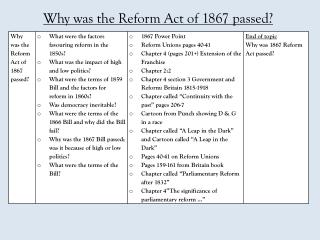 Why was the Reform Act of 1867 passed? . What were the factors favouring reform in the 1850s?. Learning Objectives: To understand why the attitude of politicians to reform changed. To learn about the attempts to bring in a Reform Bill. Cartoons. Cartoons are used a lot at AS and A2. New Models for Care Delivery in the Reform Era 9.27.2012 - . agenda. key challenges of the reform era hospital and

1. Reform - . the improvement or amendment of what is wrong or corrupt. 2. retro. to do again. 3. revolution. rapid

Infectious Disease - . infectious diseases are passed from person to person. they are passed through the air, water,

SANDF LAND AND LAND REFORM - . presentation to the portfolio committee on defence on the nature &amp; extent of

Unit 4 Review - . chinese exclusion act. passed in 1882 prohibited immigrants from china was passed because of