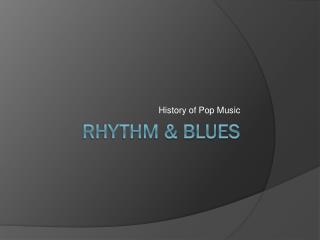 History of Pop Music. Rhythm & Blues. Origins. Rhythm and Blues was the description given to music that was primarily marketed to African-Americans during the 1940s . R & B is a term that has been used to describe different types of music over the years. 1940s & 1950s: Blues Rhythm - . the pattern of beats or stresses in spoken or written language created with meter, rhyme, and alliteration.

BLUES - . how did the blues

rhythm - . rhythm is the beat and the pace of words in a piece of writing. prose. the ordinary form of written language.

Rhythm - . rhythm refers to the regular recurrence of the accent or stress in poem or song. consider languages and

RHYTHM - . like music makes you want to move to the beat, rhythm leads the eye from one point to another, creates motion.

Rhythm - . rhythm is. rhythm is the beat that the poem follows. rhythm uses stressed and unstressed syllables to make the

Blues - . 5 facts. the blues grew up in the m ississippi delta just upriver from new orleans. no single person invented

Rhythm - . chapter 3. rhythm. what is rhythm?. rhythm is basic to life!. rhythm. we see it in the cycle of day and night!

Rhythm - . recurrence of elements having recognizable relationships between them. harmony. simplicity. power. repetition