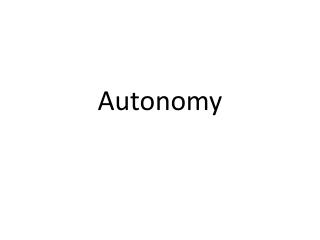 Autonomy. Autonomy. Ancient G reek: autonomy = „one who gives oneself their own law“ au·ton·o·my: I ndependence  or freedom, as of the  will  or  one's actions: the autonomy  of the individual . Autonomy - . “in our al-anon groups and service arms, our freedom is balanced with the responsibility to preserve our

autonomy - . mastery. motivation. how can we inspire better performance at school and at work?. purpose. this is your

AUTONOMY - . determining the course of one’s life through the process of making choices and acting upon them. principle

AUTONOMY - . self-determination. autonomy. determining the course of one’s life through the process of making choices

Autonomy - . chapter 9. what is autonomy?. independence an individual ’ s capacity to behave on his or her own autonomy

Teacher Autonomy - . by ashley snarr. what is it?. h aving independence or freedom, self-government , or the right of

Cornerstone Autonomy - . anthony j. courtemanche 6/11/2016. “when will cornerstone be an autonomous church?”. terms.

Canada’s Growing Autonomy - . autonomy. a nation’s political independence from another nation’s interference in its