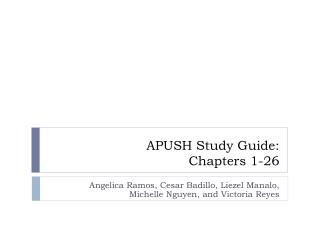 ACT Study Guide - Act exam is the most popular exam to enter the college in usa. it’s quite difficult exam. it consist

How To Do an APUSH - . dbq. a “dazzling” dbq is like a tasty hamburger. the introductory paragraph. the “top bun”

Chapter 1 Study Guide - Answer the following questions on binder paper following the format shown in class. what do you

APUSH - . bell work: as preparation for our test. here is a series of sample multiple choice questions. pick the ones

Georgia U.S. History End-Of-Course Test Study Guide - . what is the

Delaware State Driver’s Education Study Guide - . section 1. is d riving a constitutional right granted to you by the

Chapters 1-8 - . drama task: you have 10 minutes to prepare a 60 second dramatic recap of the first 8 chapters of the