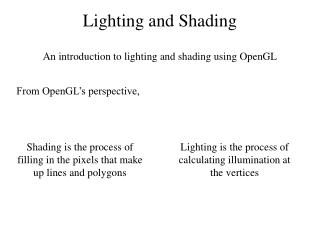 Basic Lighting and Shading - . the important properties of light. it can reflect, bend, spread and scatter. most common

Vertex Shading : Do- It - Yourself Transform , Lighting , and Texgen - . vertex shader. every shader should at the very