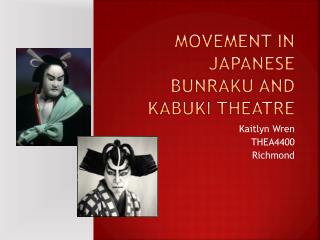 Movement in Japanese Bunraku and Kabuki Theatre. Kaitlyn Wren THEA4400 Richmond. objective. Objective: to take a comparative look at how the movement styles of the Bunraku and Kabuki theatres were mutually influenced through their competitive, interdependent historical development.

Laughter and Tears in Osaka - . enjoy yourself!!. part 1: plays of osaka. ancient plays. example of a puppet ancient

The Globe Theatre - . the globe theatre was founded by william shakespeare in 1599; this theatre was called ”the

Search for the Kabuki tribe! - . you are an explorer in the jungle looking for the legendary kabuki tribe. years of

Origins of Theatre - . objectives. students will examine: some of the theories about the origins of theatre the

Theatre thru the Ages - . from how theatre began to theatre today. theatre vs. theater. what is theatre? theatre is any

Understanding Historical Context - . world theatre. bunraku is a form of japanese puppetry and storytelling. the form

Unity Theatre - . a brief insight …. unity theatre (one still exists) was part of a national theatre movement that once