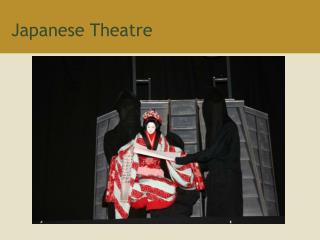 Japanese Theatre. Origins of Japanese Theater. Early theater was based on Shinto ritual celebrations known as kagura dating as far back as the third century b.c.e.

The World of Cinema and Theatre - . lesson 2. topic: watching films objectives: . to revise and enrich students’

Theatre through the Ages - . greek theatre had a religious significance and an offering was always made to the gods

Existentialism &amp; Theatre of the Absurd - . theatre of the absurd. 1940s-60s, primarily french—a reaction to the