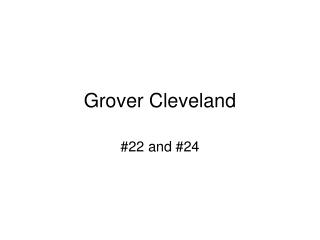 Grover Cleveland. #22 and #24. Career. Cleveland worked as a lawyer early on, gaining a reputation as a solid attorney. Cleveland served as sheriff of of Erie County 1871- 1873 Cleveland was mayor of Buffalo briefly before moving on to become governor of New York in 1882.

What were some of the major problems facing farmers during the Gilded Age ?? - . populism &amp; the election of 1896.

The 1912 Election Key Issues - . 1912 election. tr runs against taft for the republican nomination. tr is not nominated

Weird Presidential Facts - . by: eric flanagan. number of presidents. barack obama is the 44 th president of the united

President Grover Cleveland - . 1885-1889. “a truly american sentiment recognizes the dignity of labor and the fact that

Best of World Series - The chicago cubs take on the cleveland