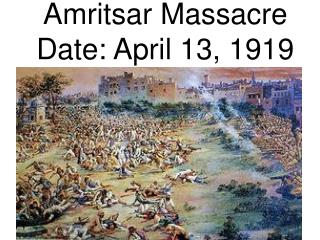 Amritsar Massacre Date: April 13, 1919. 2. At Amritsar, what did General Dyer intend to do? What did he do?. General Dyer intended to have an impact on all of India. He killed 379 men, women and children. He wounded 1,100. He showed no mercy and gave no warning. Nagel: War and Massacre - . what is the moral basis of war restrictions [jus in bello prohibitions]? can we create a

The Boston Massacre by: Tripp - . how and why did it happen?. the boston massacre happened because the british brought

The American Revolution 2 - . swbat: compare and contrast different points of view of the boston massacre. homework:

The Sand Creek Massacre - . taylor feinman, grace watkins, and caitlin bullock . what was the sandcreek

- Mountain meadows massacre read page 153 and pretend you are one of the surviving children. what do you see, hear,

The Boston Massacre - . facts. the cause of the boston massacre was d isagreement over the stamp act and other british

I. Boston Massacre - Aim : how does the boston massacre illustrate the growing tensions (conflict) between the colonists

Securing Your Future Since 1919 schwartzbrothers - April 17,2013 for agent use only. howard sharfman president 500 west

Who was to blame for the Amritsar Massacre of 1919? - . amritsar. objectives. in this activity you will: understand why

The Peterloo Massacre - . you need to be able to: describe what happened. explain the reasons why this event took place.

A Party &amp; a Massacre - . maccarthy. questions. q1: what were the different points of conflict between the

Boston Massacre - . depicted as a brutal slaying of innocent civilians, which made colonists madder at britain.