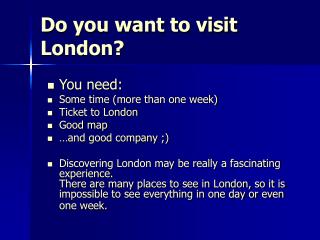 Do you want to visit London?. You need: Some time (more than one week) Ticket to London Good map …and good company ;) Discovering London may be really a fascinating experience. There are many places to see in London, so it is impossible to see everything in one day or even one week. London Marathon - Thousands of spectators filled london's streets to witness a double for kenya, with wins by daniel

LONDON - . 1. london. the capital of the u.k london is the biggest city in britain and in europe it has a population of

My trip to London England - . by yu-jo chang. why london?. visited a friend the metropolis architecture royal

Review of the Potential Impact on Air Quality from Increased Wood Fuelled Biomass Use in London - . peter coleman.

London ( londýn ) - . london. london is the capital of england. in london, home to the queen elizabeth ii. london has

1)What comes to your mind when you hear the word ‘London’? - 2)do you think london is the greatest city in the

London as a Centre of Culture - . the project is done by subakova asima teacher of english secondary school № 1 village

A trip to London - . tasks. getting information deciding on transport finding accommodation setting up the programme.