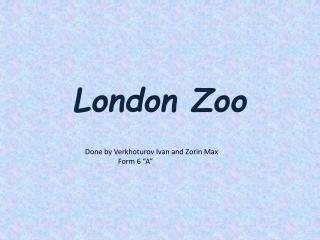 LONDON ZOO - . some facts about london zoo. in the heart of london, on the north side of regent's park, is london zoo.

London Zoo - . questions. how many kinds of animals does the zoo have ? why is the tiger territory so fantastic ?.

London ZOO - . the four animals i chose. giant river turtle . it is an amphibian it is large kingdom animalia, phylum

London Zoo - . london has a very fine old zoo, which many children with their parents and friends visit every day. the

Design a poster for London zoo - . this project is about using the web to find reliable data/information. we may then use

Your day at ZSL London Zoo - . find out what to expect from a day at the zoo. think about how you will make the day

Your day at ZSL London Zoo

“Zoo” - . fiction: practice leap activity. 1. which situation most closely resembles this passage? a. a smiling