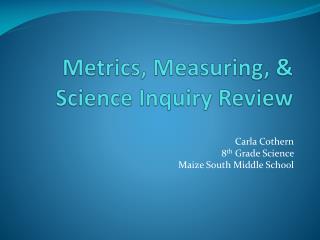 Metrics, Measuring, & Science Inquiry Review. Carla Cothern 8 th Grade Science Maize South Middle School. What is the SI unit for volume?. Liter. Which is larger – a meter or a millimeter?. meter. Identify the independent & dependent variables in the following experiment.

***METRICS*** - . measurement. what is measurement? any standard of comparison, estimation, or judgment. why do we

Metrics and Measurement - . be sure to look at the helpful links on the unit page on the website if you need extra

Metric or SI Measurement - . stepping it up (or down). which unit is which?. if you are measuring length use meter . - m

What the Heck is Metrics ? - . metrics is the language of science. by measuring, scientists can express their