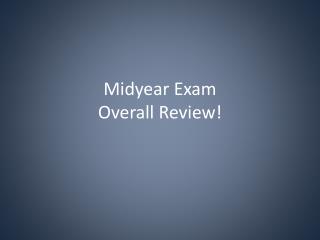 Midyear Exam Overall Review!. Chapter 1- Introducing Environmental Science and Sustainability. The World Bank estimates that________ of the world’s population lives in extreme poverty . a) hardly any b ) nearly half c ) most d ) nearly all . How many people are on Earth now? Exam Review - . by: khiyal felder . anglo-saxon. great britain was invaded by all except greeks after romans left

Exam Review - . semester 2, 2011. find the force of an object when it hits the ground if it is dropped from 5 meters and

Exam Review - By: toney clark and james pridgen. exam review. macbeth. called: the scottish play was written by james i

Exam Review - . by: raquel mosley. macbeth . summary: the scottish king duncan, decides that he will confer the title of