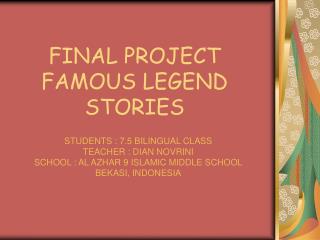 FINAL PROJECT FAMOUS LEGEND STORIES. STUDENTS : 7.5 BILINGUAL CLASS TEACHER : DIAN NOVRINI SCHOOL : AL AZHAR 9 ISLAMIC MIDDLE SCHOOL BEKASI, INDONESIA. THERE ARE MANY LEGEND STORIES AROUND THE WORLD. OUR TEAM TRY TO PRESENT SOME OF THEM TO YOU.

The Pied Piper of Hamelin - . karina kuo. a folk tale from the town of hamelin in germany. famous versions of the legend

The Legend of the Pineapple - . a philippine folktale on how the pineapple came to be. once upon a time there was a

The Functions of Illustrations in Picture Storybooks - . adapted from childen ’ s literature, briefly, by tunnell