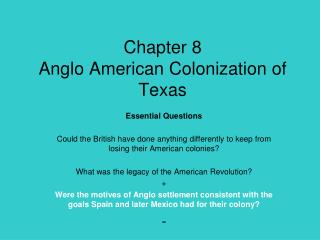 Chapter 8 Anglo American Colonization of Texas. Essential Questions Could the British have done anything differently to keep from losing their American colonies? What was the legacy of the American Revolution? +

Anglo-Saxon Background - . a prelude to beowulf. history. the anglo saxon period is the oldest known period of time that

The Anglo-Saxon Era - . 449-1066. small but powerful! . despite being so isolated, england still managed to become the