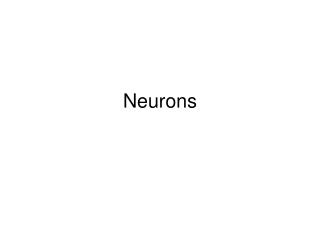 Neurons. Functional Organization of Neurons. Input zone (dendrites). Transmission zone (axon). Output zone (synapses). The Resting Potential. Almost all cells have a transmembrane electrical charge difference, with the inside roughly 50-100 mV negative relative to the outside. Neurons - . do now. do now how does this relate to the nervous system?. homework due today. read section 31.1 answer

Neurons - . vary in size and structure, but have common features: cell body dendrites axon mature neurons do not divide,

Neurons - . the human brain. thought experiment. scientist have discovered that the brain has about 83 billion neurons.

Neurons - . i bet your neurons are all fired up now!. the nervous system. neuron = 1 cell. nerve = a bundle of neurons.

Neurons - Unit 2 – biology of psychology. day 1 -. neurons. because when you say someone’s “wires are crossed”

Neurons - . a nerve cell capable of generating and transmitting electrical signals vary in structure and properties use

Neurons! - . message = nerve impulse the impulse travels in one direction it travels at the same speed within 1 neuron it