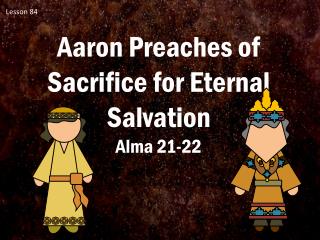 Lesson 84 . Aaron Preaches of Sacrifice for Eternal Salvation Alma 21-22 . The Mission of the Sons of Mosiah. After Ammon and the sons of Mosiah separated Aaron and his brothers, Omner and Himni go to preach in Jerusalem About 90 BC. The City of Jerusalem Lesson 84 - Interpretation - Photos for the poem falling up by shel

Word lesson 2 (57-84) - . britney inman. which method of text entry enables a user to double-click a blank area in a

Psalm 84 - . how lovely is your tabernacle. psalm 84. background. to the chief musician upon gittith (instrument of gath)

Psalm 84 - . 1 how lovely is your dwelling place, o lord almighty! 2 my soul yearns, even faints, for the courts of the

84. HOLY GROUND - . geron davis arranged by darrell bledsoe. we are standing on holy ground, and i know that there are

AP Environmental Science - . what have you gotten yourself into?. what is ap environmental science?. an interdisciplinary