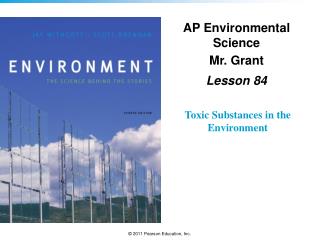 AP Environmental Science Mr. Grant Lesson 84. Toxic Substances in the Environment. Objectives:. Define the terms bioaccumulation and biomagnification . Describe the types, abundance, distribution, and movement of synthetic and natural toxicants in the environment.

Lesson 62 - . what do we say when we pray the doxology?. what does amen mean?. numbers 5:22 may this water that brings a

ENVIRONMENTAL SCIENCE Exam I Powerpoint - . environmental science is the study of how the natural world works, how we are

AP ENVIRONMENTAL SCIENCE - . answer the following questions on a sheet of paper by matching the term with the correct

Arabic Scientists - . sciences:the driving forces??. the prophet muhammad said &quot; it is the duty of every muslim

Extinction - . loss of a species or group of taxa primary cause: failure of species to adapt to changes in environment

Biomagnification - . when we try to pick out anything by itself, we find it hitched to everything else in the universe.

Biomagnification - . biology. when we try to pick out anything by itself, we find it hitched to everything else in the

Bioaccumulation - . the start of the problem. many chemicals we use in our daily lives are toxic. toxic chemicals

Science and the Environment - . chapter 1. section 1: understanding our environment. environment everything around us

Biome Lab - . 05. biome. a biome is a large geographical area of distinctive plant and animal groups, which are adapted