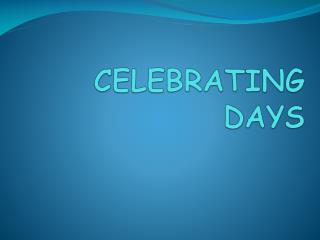 CELEBRATING DAYS. EASTER DAY . Easter is a religious holiday that commemorates the resurrection of Jesus Christ three days after his death by crucifixion some 2,000 years ago . For Christians , Easter is a day of religious services and the gathering of family . Celebrating Traditions - . does your family have any special traditions?. in the united states, we celebrate thanksgiving

Celebrating Youth - . uncovering those things which help prepare youth for life and its challenges. resiliency-based

Celebrating Diversity - . chapter l3. what is diversity?. we are all different. race. talents. learning styles. language.

Celebrating Relationships! - . what is royal redeemer doing for our children?. underlying mission . partnership

Celebrating Sin - . the dark world of sin. we live in a sin-soaked world, 2 pet. 3:7 christ calls us out of the darkness

Celebrating Golf - The european tour. celebrating golf. what does the role

Celebrating Easter - Christians around the world celebrate the easter

Celebrating Diwali - Hindus around the world celebrate the festival of

Celebrating Jesus - . mike mazzalongo bibletalk.tv. 26  after eight days his disciples were again inside, and thomas